With Cloudify, you can update a deployment, which serves multiple purposes: - Changing the deployment topology: for example, adding a new type of database to an existing deployment of webservers and databases. - Changing the settings of existing nodes: for example, resizing a volume, or changing the size of a VM instance. - Updating the real state of the provisioned resources to match the blueprint. For example: after manually resizing a volume by using a cloud provider’s console, run update to bring the volume back to the state described in the blueprint.

A step is a logical concept that represents a single change in a deployment update. There are three different types of steps, add, remove, and modify. The scope of a step is determined by its most top-level change. For example, if a node is added that also contains a new relationship, this is an ‘add node’ step, not an ‘add relationship’ step. Similarly, if a node’s property is modified, it is not a ‘modify node’ step, but a ‘modify property’ step. A list of all possible steps is located here.

In addition to applying the changes based on a new blueprint, the Cloudify Manager can also: - check the status of each node instance in the deployment - if necessary, heal the failing node instances - check the configuration drift of each node instance - find the differences between the node configuration as described in the blueprint, and the real state of the provisioned resources - if necessary, update the provisioned resources to match the blueprint.

This status and drift checking is based on the operations defined by each node, usually in a plugin.

Updating a deployment is a multi-stage process. The high-level overview of the workflow is:

For a more in-depth description of these steps, see the workflow documentation 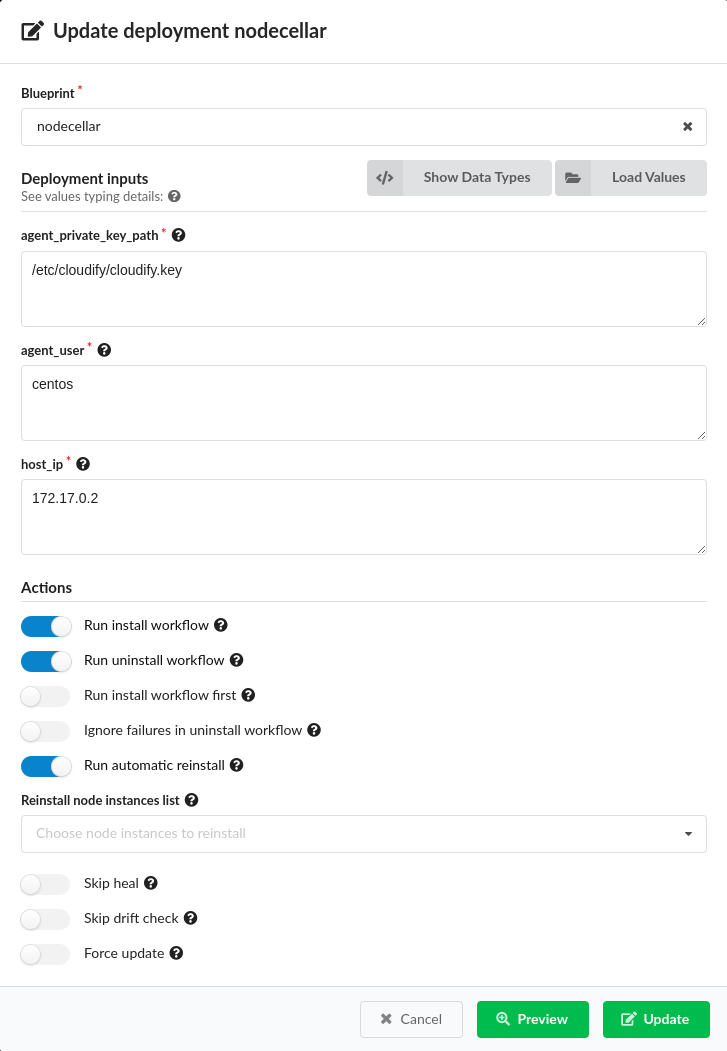 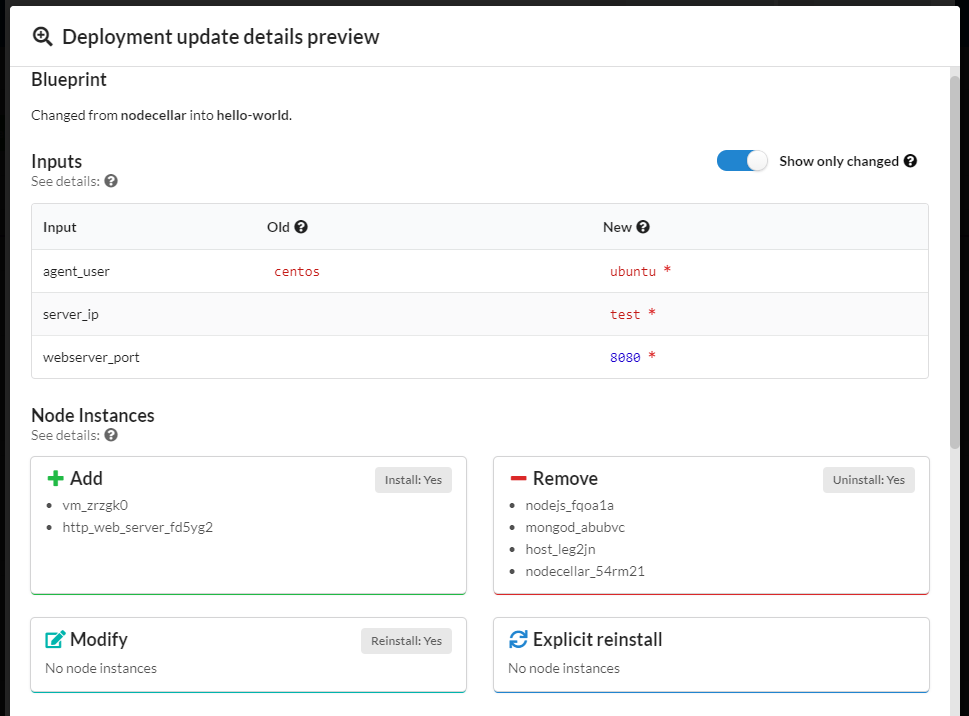 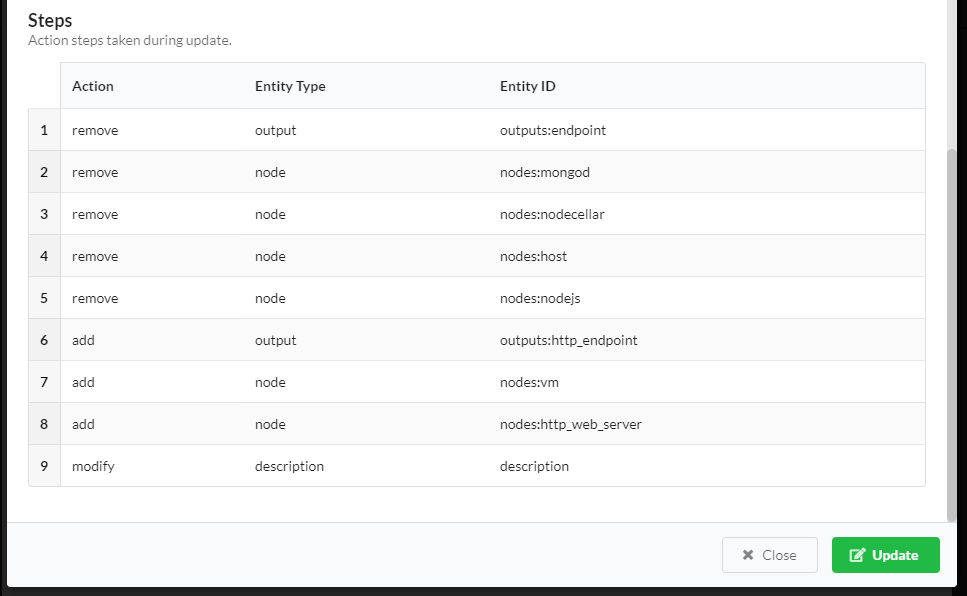 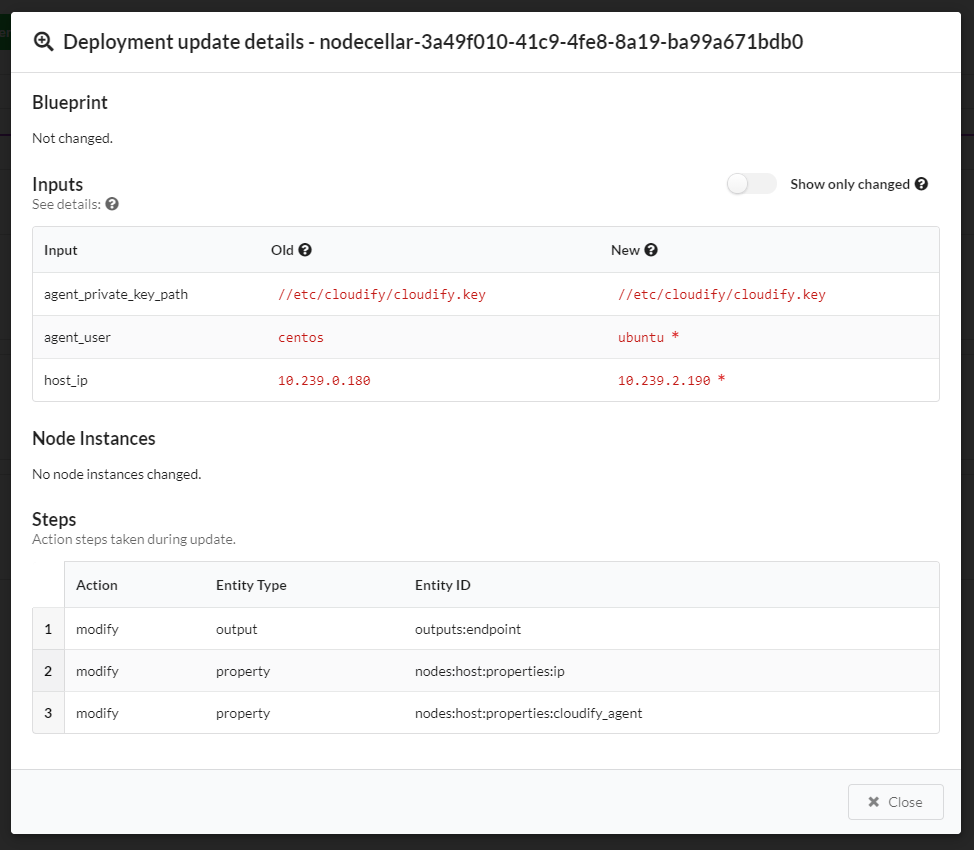 Skipping parts of the update procedure

You can skip parts of the Deployment Update procedure using flags. By default, all phases are enabled. The flags can be combined as needed.

The relevant CLI flags are: * To run an update without actually doing any changes to the blueprint, but still run the check_drift and update operations, use the --drift-only flag:

If you provide an input with the same name as an existing deployment input, it overrides its value. Other new inputs will be added to the data model as usual.

Assume that you have the following node in your deployment, and that the port input has a value of 8080:

To avoid reinstalling instances when their properties have changed, implement the check_drift and update operations. Instances of nodes that implement those operations, will run them instead of being reinstalled.

The cloudify.interfaces.lifecycle.check_drift operation should examine the node properties, the instance runtime properties, and the actual state of the provisioned resource, and compute the differences.

The instance will be considered drifted if this operation returns a non-empty value (for example, a Python dict describing the differences).

The Cloudify Manager doesn’t inspect the returned value, so it can be any object. Plugin authors are advised to return a description of all the differences, so that the update operation can act upon them.

If check_drift returns an empty or false value, update operations will not run, and even in case of blueprint changes (e.g. if the node properties have changed), the instances will not be updated or reinstalled. Take care to always return a non-empty value if there are any changes to the instances.

If the check_drift operation is not implemented, the instances are only considered drifted if there are relevant blueprint changes (e.g. the node properties have changed).

Plugin authors can implement any, or all, of these operations. These three operations can be implemented in a way that mirrors the create, configure, and start operations.

In these operations, the value returned from check_drift can be accessed using ctx.instance.drift.

If none of these operations are implemented, the instance will be reinstalled in case of any drift.

In this example, consider a volume created on some cloud platform - to allow resizing that volume, implement the check_drift and update operations:

It is possible to import plugins with no version specification at all. Then, the highest version of that plugin will be selected at deployment update time. Therefore, two deployments created (or updated) at different times can use different plugin versions (if a new version of the plugin was uploaded between creating those deployments). Also, if the version is not constrained, then any deployment update could lead to unintentionally upgrading the plugin to the newest version.

Plugins are installed on first use, so a deployment update is not necessarily going to install them up front. They will only be installed on the machine that attempts to use them, when needed.